Vodafone’s coverage was never as bad as it was made out to be. These days, in metro areas, whether you want 3G or 4G speeds, Vodafone’s network is not only fine, it sets the standards when compared to Telstra and Optus. Additionally, Vodafone have innovated, especially in terms of their global roaming proposition. A hoard of independent reviews confirm the progress Vodafone has made in improving it’s network coverage and speed. Vodafone also have broader 4G coverage than Optus, following an announcement in April 2016. Vodafone’s 4G network covers 95.3% of the population with a 4G signal. As if that wasn’t enough, in June 2016, OpenSignal, an independent network research company said Vodafone’s network provided a 4G signal for 88.48% of the time , Telstra’s customers received a 4G signal 88.06% of the time . That’s exactly the same coverage for both companies, on 4G in Australia.

Add to the network recovery, Vodafone’s roaming options which allow for $5 per day fixed charges, to use your existing service inclusions overseas and you can see why Vodafone has started building its customer base again.

However, when it comes to 3G SIM Only plans, Vodafone’s network reseller partners – Kogan and Lebara offer substantially better value. And, since Vodafone’s price hikes, it’s now possible to get 4G services from Amaysim on the Optus network for the same price as you’d pay on Vodafone.

You’re bound to ask about Vodafone coverage. It’s improved a lot since customers started leaving in 2010 and the company was called ‘Vodafail’ in 2010.

Vodafone have a market share of 14.8% in Australia. Already, over 2.0 million people are using 4G on their network. As you are likely to have read, the research says that the Vodafone 4G network is the fastest of all the Australian phone companies in city areas. They have ‘re-farmed’ their 850MHz frequency which provides 4G coverage to 91% of metro area .  And unlike Optus and Telstra’s 700 MHz roll out, almost all Australian phones can use the 850 MHz frequency right now.

Additionally, if you have concerns over the Vodafone network, there are a number of deals available on the Optus network which have pricing that’s better than the current Vodafone deals in market. If you’d like to save 30% on your phone bill and use the Optus network, let us tell you how.

Vodafone’s coverage has improved dramatically in the major Australian cities.

The reality of Vodafone’s network coverage

The reality of the gap between Vodafone’s network performance, even before the latest statistics came in, was mis-represented. The difference between the performance of Vodafone and other Australian networks was exaggerated in the press and by the people who were so upset with them – their customers. Vodafone’s performance improvements since those dark days has been so impressive, even the Chief Financial Officer of Telstra has been saying complimentary things about Vodafone’s trajectory.

Early 2013 saw the build of the Vodafone 4G or LTE network. It was turned on mid 2013 and it now rivals Telstra’s 4G networks for speed ( although not coverage. ) Importantly, Vodafone have addressed the core of the problem. Not only have they improved the base stations they use but also the back haul. To ordinary Australians that means they have a genuinely improved and far more reliable network.

This is especially true in the major cities where, as you will see from our infographic, above, the research says, Vodafone’s coverage is at least as good as Telstra and Optus’.

Refarming of Vodafone’s 850 MHz network in late 2015 and early 2016 was tied in with a number of parallel improvements. Vodafone have rolled out the first 3 of a total of 70 Blackspot improvements. The company intends to build or upgrade 70 base stations in total across Australia as part of the government’s program.

The numbers don’t lie. Vodafone’s network planning has improved a lot. They’ve reported an 85% increase in the amount of data their customers use in just the last 12 months. That trend seems set to continue and Vodafone have obviously anticipated it.

What’s in this article ?

A couple of helpful notes before we get in to it.

There are 2 aspects to Vodafone coverage. The people / land which is covered and the quality of that coverage.

As a result, Vodafone’s geographical coverage ( the land mass it covers with network ) is a lot less than Telstra . This is largely a strategy decision on the part of Vodafone Australia. They know the perception of their network needs to improve and they’ve tried to focus on giving their customers a better experience in metro ( city and town ) areas. 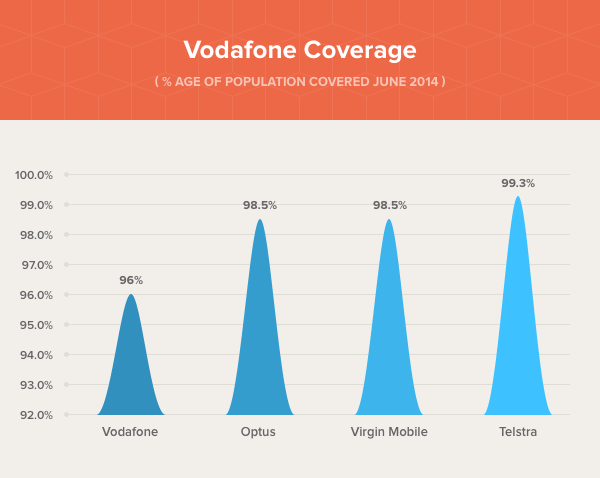 CHECK COVERAGE IN YOUR AREA

Independent Research is consistent about the comparisons

We spend a lot of time researching the articles we show our customers. Within that research, we have discovered a number of publicly available reference sources. These sources show independent research which you can use to inform the decision you’re making. The results across the following 3 surveys are consistent.

Every year the industry ( telcos like Optus, Telstra, Vodafone Australia and other industry contributors including Nokia ) pool resources to have a report created. The report is known as the Australian Mobile Phone Lifestyle Index.

One aspect of Australian Mobile Phone usage that it explores is network satisfaction.

Above : Again, Telstra comes out on to when it comes to network satisfaction. Interestingly, Virgin Mobile does better than Optus – which is not easy since they use the same network. Network Satisfaction comes down to someone’s experience with the network and, more broadly, the company. In our opinion, the great customer service that Virgin Mobile offer ( they got the highest marks of any of the major telcos ) has positively influenced people’s ‘feelings’ about the Virgin brand vs the Optus brand.

Unfortunately, Vodafone comes out substantially below the other networks in every one of the independent reviews, because :

Vodafone’s 4G investments have paid off

This is an Australian site. Everyone in our team knows Australia and has some familiarity with how the Vodafone network has struggled in the last couple of years. Around 2.5 million customers left Vodafone at their lowest ebb, with the majority going to Telstra. The reason for the move was largely to improve their network experience. People were even prepared to pay Telstra more to get decent coverage. Vodafone are trying to fix the problem. They’ve spend $billions getting the network back to spec.

In large part, Vodafone early coverage improvements were about the basics. They started with a capability known as 3G+ or 3G Plus. 3G Plus is just adding in new frequencies ( 850 MHz and 900 MHz ) which work better over long distances and when travelling through walls.

Vodafone coverage will also be improved through the network sharing agreement they have put in place with Optus. This allowed Vodafone access to 400 Optus base stations in 2012 and has allowed access to 500 more , more recently. Network sharing helps both companies improve quality of coverage at a lower cost and compete with Telstra.

Additionally, Vodafone offer High Definition voice services on their network at the moment. This is reasonably advanced technology. It is far from standard anywhere in the world, let along Australia. From a network perspective, reaching 95.3% – that’s 23 million people, is an incredible achievement. It shows how far Vodafone’s 4G coverage has come.

You can’t say it any more clearly than Vodafone have. Their 4G network has been independently verified as providing Australians with a 4 signal just as often as Telstra. As we said above, The annual Opensignal report showed Vodafone mateched Telstra. Vodafone users have a 4G signal 88.48% of the time , Telstra customers had one 88.06% of the time .

In late July 2014, Optus and Telstra started their commercial trials of the 700 MHz frequency they won at auction. Each paid over $1bn for the privilege of network access. Vodafone didn’t bid due to it’s financial problems at the time and focus on improving it’s existing network.

However, at the same time, Vodafone started testing it’s existing 850 MHz frequency which it’s ‘re-farming’ ( reusing ) the asset. It’s this that has led to the significant improvements we see today.

So, Vodafone’s coverage has improved dramatically, especially in cities. But they now match Telstra for 4G coverage

As we’ve seen above, despite noticeable improvements, Vodafone Coverage is still not quite as good as theTelstra in Australia when considered nationally, across their whole base. However, where you are, it could be fine. One way to test this is to take out a post paid contract with Vodafone Australia and return the handset if coverage is not good in your area. The ability to test the network this way to see if it works for you is called the Vodafone Network Happiness Guarantee.

Here are some things to make sure of if you intend on using the Vodafone Network Happiness Guarantee.

Recent years have been characterized for Vodafone by a number of innovative plan features.

Attention: The internal data of table “3” is corrupted!

Network coverage is an important aspect of your decision when you’re choosing a mobile and a telco to go with. Vodafone have waited until they’d shown substantial improvements in their 3G network before they made a big deal out of of their turnaround. They’ve improved their 3G Plus network and rolled out 4G with speeds which are equal to if not better than Telstra’s in cities. Vodafone have also completely upgraded their back-haul infrastructure and now provide 4G data speeds to more people than Optus. It’s time to put aside the bad network story for Vodafone. Things have changed. As of mid 2016, Vodafone match Telstra for 4G network coverage.

In addition to their network improvements, Vodafone are improving blackspot performance with 63 scheduled for removal this year. their VOLTE rollout is going ahead full steam. Their roaming proposition is best in market and they are managing huge increases in data usage.

If you want a contract, with Vodafone’s Plan refresh they’ve improved the deals they offered, and implemented innovative roaming and customer service features. They’re taking it seriously and they’re credibly taking a step towards gaining back the customers they lost. However, if you want a SIM Only deal, you can do better than Vodafone. If you have a 3G phone, as you’ve seen, Cmobile and Lebara offer incredible value and exactly the same 3G coverage footprint as Vodafone. If you want a 4G SIM Only plan, check Boost Mobile or Amaysim. Each offers a greater 4G coverage footprint on either Telstra’s 4G network or Optus’ 4G network. And their pricing is cheaper than Vodafone’s.