Optus just landed another major deal for football fans – the telco’s Optus Sport will broadcast all Copa América matches live this year, as well as in 2024 and 2028.

Optus Sport has been landing broadcasting deals with some major football tournaments around the world, leading to a very impressive lineup of live match coverage for:

CONMEBOL Copa América is the oldest international football tournament. It’s primarily a South American men’s football contest, but since 1993, invites have been sent out to two teams from other nations to play in the Copa América tournament.

Optus Sport landing this deal is significant for that reason – this year, Australia is one of the two nations invited to participate in the tournament for the first time. The one-month long tournament will run from June 12 to July 12 this year. Quatar makes out the other foreign team for this year’s contest.

Optus seems to have struck a solid relationship with Japanese advertising firm Dentsu. The firm signed a deal with Conmebol for the tournament lasting 8 years, and has in turn entered a deal with Optus to broadcast the games here in Australia. Prior to this latest deal, Dentsu was responsible for handing over Japan’s J.League to Optus as well.

Optus Sport is becoming the equivalent of a television sport broadcasting channel, but carries that lure to pretty much any device you can think of. The platform reported 700,000 active subscribers last year, and that number has now been bumped up to 825,000.

With recent local and international additions, expect this latest Optus Sport number to grow even more, as well as Optus subscribtion numbers in general just as they did after Optus landed their deal with the English Premier League (EPL). 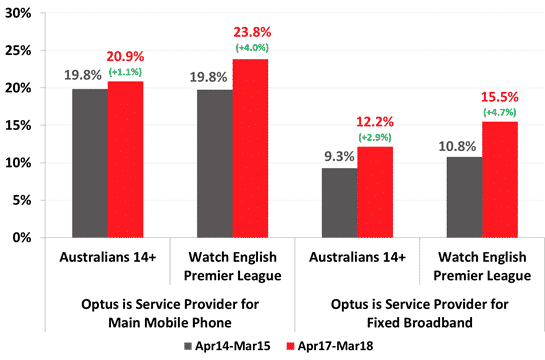 While Optus Sport broadcasts a range of local and international soccer leagues and tournaments, the platform is looking to expand beyond just football. Optus is expected to take over broadcasts of Rugby Australia from Fox Sports later in the year, setting the telco up for an even broader appeal for sport fans in general.

How to watch Optus Sport

Optus Sport is available to everyone – both Optus subscribers and non-subscribers. Here’s how you can get it:

You can watch Optus Sport broadcasts on a range of devices:

Optus Sport has made a series of moves over the years, and they’re finally paying off. The platform now has live broadcasts from several local and European football leagues, the Japanese J.League, and now Copa America. Optus is targeting football fans, but might eventually branch into other sports like rugby. Given that most of their broadcasting rights are exclusive, Optus Sport might be your only option for live matches, depending on the league.