How much is a lot of data ?

Individual needs vary. Typically, a plan with more than 2GB ( approximate Australian Average usage ) can be thought of as having a ‘lot’ of data.

The bigger your phone’s screen, the faster your network connection and the more video you watch on your phone, the more data you’ll need.

If you need help figuring out your usage check out our ‘How much data do I need?’ article.

Some plans have ‘zero rated’ or ‘data free’ inclusions. What does that mean?

Many plans have included data which is not charged for by the phone company. Optus’ Prepaid Epic Data plan, for example, have up to 10GB data added upon recharge for streaming Netflix and more. Other examples include OVO Mobile’s streamed video and Telstra’s sports data-free streaming content.

Incredibly, this plan feature does exactly what you think it does. When you use the entertainment services provided by these companies, even if it’s video, the data you use will not come from your monthly bundle allocation. For example, if your phone plan has 6GB of included data and you watch 2GB of ‘data-free’ streamed video, you will still have your 6GB of data to use for other things.

In the industry, this term is often called ‘zero rating’. You can find out more on this subject in our article dedicated to ‘zero rated data’.

Where can I find out more about plans with a lot of data which ALSO offer free streamed audio ?

Phone companies including Optus (their post-paid range) and OVO Mobile now offer plans which include data-free streamed audio. You can find out more about streamed audio and other phone plan entertainment offerings in our dedicated article.

Who has the best value data inclusions in their plans ?

A number of providers offer great data inclusions in their plans. You can see the best on this page.

Yomojo Mobile, an Optus network reseller, offer the best data inclusions across their range in our view.

I want a data plan for my Mobile Broadband Dongle or Tablet.

We explain all about these data plans in the article below. Or you can visit our page dedicated to Mobile Broadband and Tablet Plans

When people search for information on the Best Prepaid Data Plans, there are two possible interpretations of what they mean. We cover both on this page : 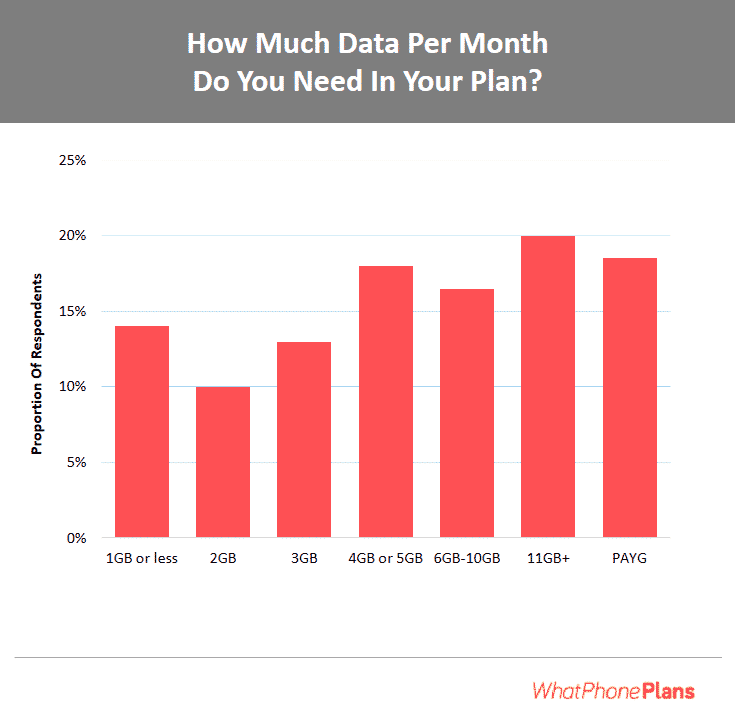 People believe they need a lot of data per month. This is probably true, but their actual usage may be less.

First and most obviously, in a world where people want to use a lot of data in their smartphone but don’t want to get ‘stung’ with extra charges, prepaid plans have an extremely useful feature. When the data in a prepaid plan runs out, the service will stop. At that point, the plan’s user has to make a conscious decision to recharge ( add more value by spending some money with the phone company, potentially on data. ) This single ‘plan feature’ means prepaid plans help users avoid bill shock better than the alternatives.

Additionally, prepaid plans have to have a lot of data included in them. This is especially true for lower spend levels (of $30 and under) the nature of prepaid plans is that users are not tied into contracts. The freedom this gives them to change plan and provider (even every month if they so wish) means people move between providers and plans more often when they have a prepaid service.

Phone companies, therefore, have to keep adding extra data over time. Our analysis shows that they (phone companies) tend to double the data inclusions their plans offer every 6 – 12 months. Prepaid plans, then, often include more data than their postpaid counterparts.

The ever-increasing data in prepaid plans over time is important because of the way it overlaps with user behaviour. According to Cisco, data usage on mobile phones is increasing at around 80% a year in our region. As phone screens get bigger and connection speeds get faster and we become increasingly reliant on the internet — provided to us by our phones — to solve the problems we face every day, our requirements for data in plans continues to grow.

By choosing a prepaid plan, not only do you get the data you need now, but you create a structure which gives you the best chance of getting more data as soon as it arrives, down the line.

Telstra and Vodafone have both responded to the massive data inclusions in prepaid plans with some clever postpaid plans that never run out of data (sometimes referred to as unlimited data). Telstra’s new SIM Only month-to-month plans all come with no excess data charges in Australia – that is, if you exhaust your plan data, your speeds will be throttled to 1.5Mbps until your next billing cycle, meaning you never run out of data. Vodafone’s SIM Only PLUS plans offer the same thing – endless data.

Such plans are great, but 1.5Mbps is quite slow – fast enough for the basics like browsing, streaming music, and checking social media, but certainly not what you would want if you had a choice. Regardless, they are great offers, and have only surfaced as a result of just how competitive prepaid plan data inclusions are.

( Note, if you have a balance on your prepaid account and use all your data up, you may be charged out of bundle rates. We suggest you do not leave credit on your account to avoid the potential overage. )

Whether you want a SIM for your phone or laptop, here’s how to pick your data-laden prepaid plan :

Here’s our table of what we think are the best of the best prepaid plans out there with lots of data. You will see that when you get into the details, (below) there is a slew of options and plan inclusions. That can make it daunting to compare what’s on offer.

Just want a lot of data ? Here are the prepaid providers we think represent the best of the best for data. All of these providers have a self-service app which will assist you in monitoring and managing your data usage through your phone.

Some people want a lot of data in their prepaid plan AND other features, too. Sport, music and international calls are common examples. Here are the best phone plans with big data allowances and these extras.

Here are the factors you should compare when weighing up the prepaid plans with decent data allowances :

If you just want to compare prepaid data plans, you may be shopping for a ‘Mobile Broadband’ SIM ? As we said at the beginning, one key demand for prepaid plans with a lot of data comes from the ever increasing number of people who have a SIM, and often a second SIM ( in addition to their phone SIM ) for a tablet computer or mobile broadband connection. 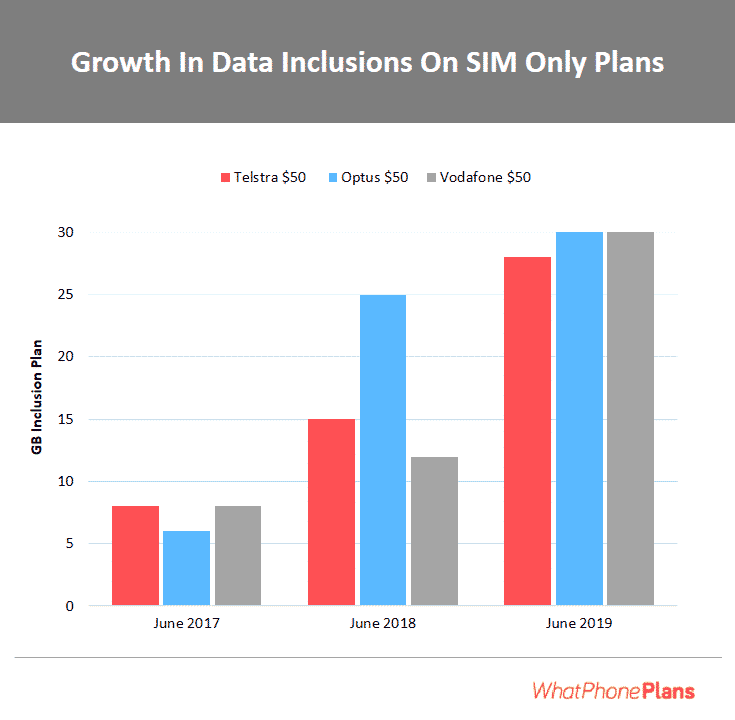 Data inclusions have become a staple in prepaid plans.

When you’re using your service, try and watch out for these things

You get some of the best data rated in the world in Australia. It’s a mark of how quickly we adopt new internet-based technologies. I just spent some time in Germany and just finding a phone plan with more than 1GB a month was hard – and prepaid plan costs were higher per month than in Australia, where we get multiple times that data inclusion.

When it comes to getting a prepaid plan with a lot of data, competition has ironed out a lot of the problems for you. Plans are kB charged now, giving you more for your money. Prepaid plans from the best of the best providers shown on this page last 30 days, not 28 days. There’s incredible value to be found, usually with smaller phone companies.  And the very fact that they’re prepaid means that if you recharge correctly ( i.e. don’t leave a balance on your account ) you will avoid bill shock. You simply can’t be charged overage.

Data is already the deciding factor in whether people buy a plan. It will be the way forward as we continue to move games, any form of storage, and everything else to the cloud. Mobile data access speeds are always getting faster. We’ve upgraded from 3G to 4G to 4GX / 4G Plus ( super fast 4G ) and 4K resolution screens on our phones. It’s a relentless path to using more data every month. Which brings us to the most important point:

Once you have your prepaid plan and all the data you need, the most critical element of using it is to check regularly whether there is a better deal on offer. Since you’re not tied in to the provider you choose, beyond the month you’re in, alternative phone companies will be competing for your business and using data as the lure to attract you. Unless you’re with OVO Mobile that automatically passes on the extra data they add into plans, the great value plan you have now will be out of date in 6 months.