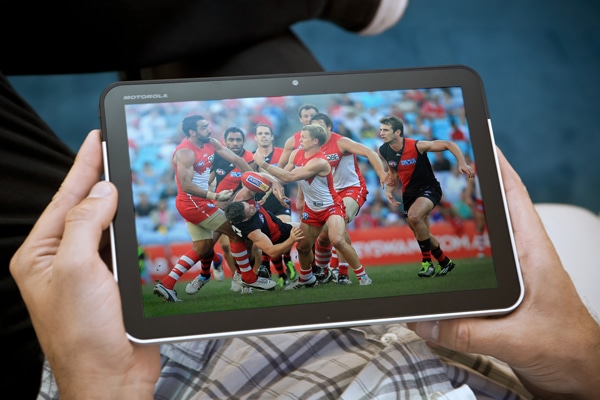 People are getting hyped up for this year’s AFL already. Many are looking forward to their usual live streaming experience with Telstra, but to their absolute horror Telstra seems to have cut down the size of the viewing screen on iPad!

The AFL season isn’t fully underway yet, but AFL fans have already been able to take a peek at the Telstra’s new AFL streaming service and there are few smiles on fans’ faces right at this moment. Just recently, fans booted up their iPads to watch the pre-AFL season event, JLT Community Series, and were stunned by what they saw. It seems that in previous years the full screen of the iPad was filled with AFL but now it has been miniaturised by a black border surrounding the game.

There have been a number of social media comments about this with writers believing that it’s just a temporary glitch. It seems that’s not the case and fans are stuck with this reality whether they like it or not. Telstra’s excuse is that the live streaming on devices is restricted to a 7 inch diagonal stream only and this is an agreement set up between the AFL and Telstra.

It’s not often that one has to refer to the terms and conditions to find out why something is not how it is supposed to be. You do, however, when you want access to Telstra’s AFL Live Pass using the Live Official App. because it is written quite clearly in black and white.

It says that Telstra’s AFL agreement limits the streaming of live matches to a screen size of 7 inches, while the highlights of any match and replays can be viewed twelve hours following the live match but using a full screen. The terms and conditions go on to elaborate that if your viewing device has a diagonal dimension of 7 inches or less, the screen will be filled but if it exceeds this dimension a black border will encase the viewing area keeping it within the 7 inch allowable maximum.

This size prevents the plugging in of the mobile device to a big screen TV and getting the full picture. This is the sort of thing that Telstra doesn’t want and nor do other AFL providers like Channel 7 and Foxtel, who want people to watch the matches on their channels and not through Telstra. Telstra’s annual pass attracts a paltry amount of only 90 dollars. This move from Telstra is about ensuring there is a clear division between mobile viewing and TV and ensuring that mobile spectators can’t project the AFL games onto a bigger screen through AirPlay.

Tweets and comments are busy on social media

Some angry fans are tweeting that they would never have signed up to Telstra’s mobile viewing deal had they known about the restrictions on size. One person even said rather pointedly that binoculars were required to improve viewing potential. One fan also reported that he had broken the code by using his iPad to record what was screened on his iPhone, while at the same time air playing onto Apple TV. Many AFL fans think they should have been informed personally in advance of this reduced viewing experience and some want refunds.

This whole scenario is just another nail in the coffin for Telstra’s reputation. People don’t like to feel hemmed in by the company’s way of manipulating its offers to suit itself rather than its customers. Subscribers are quite right to complain and it just goes to show how nasty companies can be when they have got themselves in a monopoly situation when it comes to the provision of services that are much in demand. The old economic saying that the ‘consumer is king’ is not functioning any more in today’s corporate world.

To be fair to Telstra, Optus has already come in for criticism for the quality of its EPL coverage. Similarly to the criticism of Telstra’s monopoly of AFL screening, Optus has a monopoly on mobile screening of the EPL and that rankles with soccer fans. Of all the telcos, OVO seems to have come through with least criticism of its sports coverage.