How can I get going with Vodafone Prepaid ?

There are 2 main methods of finding and activating a Vodafone prepaid plan.

In either case, when you have the SIM and the phone:

You can then use it for the period of it’s ‘Prepaid Expiry’ (a technical term in telecommunications which means how long the plan will work for before you need to pay more.

Can I keep my phone number if I want to move to Vodafone prepaid ?

Of course you can. Vodafone allows its users to keep their old phone numbers when they switch to a new SIM card.

In truth, there is no such thing as a ‘prepaid phone’. There are just cheaper phones that people using prepaid plans are more inclined to use.

So, while you will need a phone to use the Vodafone prepaid service, a specifically ‘prepaid phone’ is not required.

Is data charged in 1 KB or 1 MB Chunks on Vodafone prepaid ?

All Vodafone prepaid plans now charge you for data downloads and uploads in 1 kB increments.

Per kB charging is now common among all of the tier 1 phone companies, following the customer outcry ( through social media ) that the change to MB charging brought about.

Does my mobile data ‘rollover’ with Vodafone ?

No. Data does not rollover from one month to the next with Vodafone’s prepaid plans.

Both Optus and Telstra now offer this feature (data rollover) on (selected elements of) their plans.

We don’t see the presence of ‘rollover’ as a key feature you’re missing out on if you take a Vodafone prepaid plan. It’s far preferable to find yourself a plan which suits your requirements in terms of the voice and data allocation you need, rather than buy yourself a plan that includes more data than you require and ‘roll it over.’

For 4G, Vodafone’s recent network expanstion provided impressive statistics. Vodafone now cover 95.3% of the population. Remember, Optus covers 98.5% of the Australian population with their 4G network. Vodafone’s network now covers as much of Australia and offers equivalent speed’s to Telstra’s.

Vodafone is one of the world’s largest phone company brands. In Australia, they’ve been in the news for much of last and this year, tussling with the ACCC (Australian Competition and Consumer Commission) over whether they should be allowed to merge with TPG.

Vodafone used to be an Australian favorite, the default option when people were choosing a prepaid phone plan 10 years ago. Since then, the company has fallen from grace. Some now ask serious questions about the quality of their network.

The company does have good some things working in its favor. Vodafone use their global size to lead the market in roaming service sales. They don’t shy away from active price marketing, either. They run constant deals on data inclusions – which what market research tells us causes people to finally considering a change in their provider.

Overall, however, the simple fact is that it’s possible to buy better value prepaid plans, from other phone companies. Many of these alternatives offer better network coverage and cost less. That means we don’t recommend Vodafone prepaid plans.

Let’s take a closer look at those features, here. 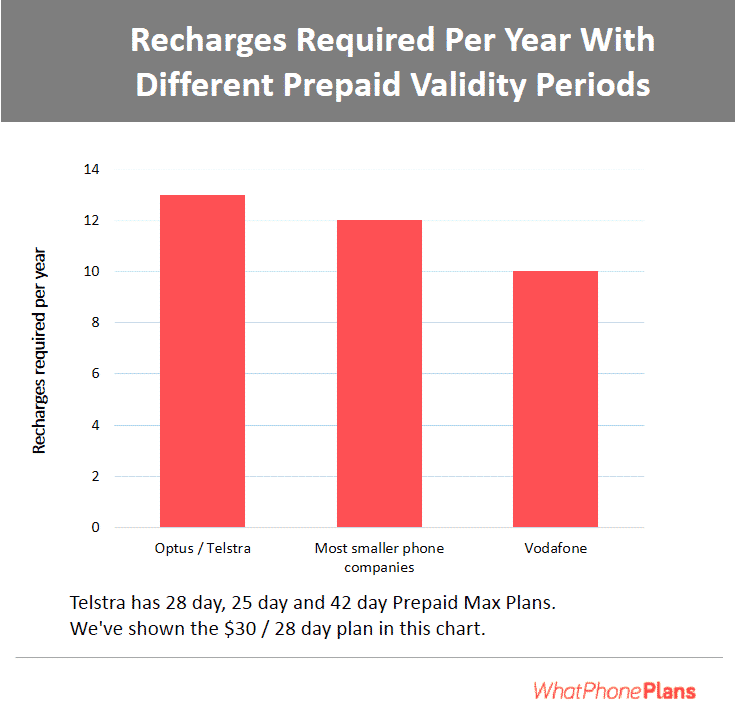 Realising the enormous network perception problems they had, Vodafone have invested heavily in the towers and masts which transmit your calls since 2010. Their 3G network now covers 0.5 of Australia. That’s a total of 23 million people. Their 4G netowrk coverage statistics are even more impressive. Vodafone’s network covers 95.3% . Remember, Optus’ 4G network covers 98.5% of the Australian population

You can find more about Vodafone coverage here. Or you can find out more on our coverage page !

Unless you live in more rural areas of Australia, independent research Vodafone on par with any other network which is available to you. Unfortunately for them, however, that’s not the point.

They now say they cover 22 million Australians, deliberately side stepping the natural comparison with Optus and Telstra who quote their coverage in terms of the proportion of the population covered.

Remember, there are dozens of smaller phone companies in Australia. Only one of them offer similar entertainment facilities in their plans that Telstra and Optus have.

Since Vodafone’s new plans don’t include entertainment, in many ways, it is these numerous, smaller networks to which we should be comparing. The smaller phone companies don’t offer entertainment either. And when you do that, the Vodafone plans do not come out at all well.

Reviewing these Vodafone prepaid plans holistically, we think will under-perform for Vodafone. It’s a shame, Vodafone has nailed their network improvements at a time when Telstra is really struggling and, with a strong prepaid suite focused on addressing the additional value smaller phone companies are offering, they could have done well. Vodafone has also taken a visible market lead in their international roaming options over the last 2 years. Now they want to do something different that’s seen as innovative, fair and which stands out in the market.

Vodafone is looking at this from their internal point of view. The prepaid range is reasonably simple viewed in isolation. From a customer’s perspective, however, it’s not. There are already hundreds of plans to compare out there. The prepaid market is more fragmented and has more providers than any other. It’s a shame. It’s still a brand I love. I hope they get back to being the challenger brand Australians want them to be.