What is an eSIM

eSIM technology has been growing more and more popular, and for good reason. The technology is basically a SIM card that’s embedded into the device, which eliminates the need of plugging in physical SIM cards to get connected to a mobile network.

With major technology companies like Ericson moving towards an all-eSIM approach to their devices, there are possibilities of the technology disrupting major sectors of the telco market, such as retail stores.

The eSIM is certainly a consumer-beneficial technology, but there are ways telcos could also benefit. With good marketing, telcos could gain several cost-saving improvements – even shutting down retail stores should come in handy, considering the high costs associated with brick-and-mortar shops giving out physical SIM cards, as well as costs associated with delivering physical SIM cards when mobile plans are purchased online.

In fact, Australian Mobile Network Operators (MNOs) – the major networks – already offer eSIM plans. Read on to learn all about what they have to offer, the benefits of eSIM technology, and how to switch from physical SIM cards to eSIM.

Is eSIM available in Australia?

All three major networks in Australia (Telstra, Optus, and Vodafone) have eSIM support. The technology has been in Australia since 2017, but it was mostly targeted towards wearable devices like smartwatches at that time.

Now, though, these MNOs have extended support for smartphones, tablets, Windows 10 devices, and other gadgets that have eSIM technology. So far, the iPhone seems the be the most supported, as Apple began including eSIMs from their 2018 iPhone lineup.

So far, no MVNOs (Mobile Virtual Network Operators) offer any eSIM plans, because the MNOs have not granted them access to the technology. That might not be the case for much longer, however, as the ACCC seems to be keeping a close eye on the issue.

The eSIM comes with a lot of benefits for the consumer. The first has to do with convenience, as it eliminates the need to physically insert a SIM card when you want to use a service provider’s network.

Another benefit is that users will be able to switch phone companies without having to wait for a physical SIM card. For instance, if you see an offer being advertised with better value than your current plan, you could switch telcos on the spot – virtually – without having to order a SIM card and wait for delivery.

Also, eSIM technology will allow you have more than one phone number on the same device. The iPhone is a great example for that, as Australian telcos offer eSIM plans for that device which enable you use their physical SIM for one plan or phone number, and the device’s eSIM for another phone number – all without having to physically switch SIM cards.

How to switch from a physical SIM to an eSIM

To use an eSIM-capable device with different networks, the device can’t be locked to a specific carrier or provider. Make sure you get an unlocked device to gain all the benefits of an eSIM. If your device is locked to one carrier, you can only use your eSIM for that carrier’s services.

Switching from a physical SIM to an eSIM depends on the device and telco in question. But let’s use the iPhone as an example – if you want to switch from physical SIM to eSIM and keep the same number, service provider, and plan, here are the general steps: 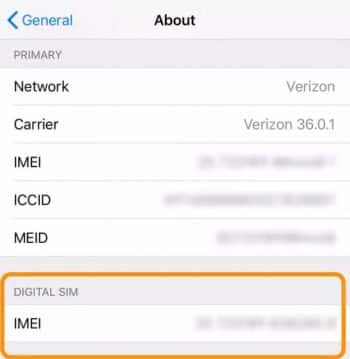 Remember, these steps are just a general way to switch from a physical SIM card to an eSIM on your iPhone, if you want to keep the same plan, telco, and service provider. For steps specific to each telco, visit your provider’s website.

eSIM technology is growing in popularity, and has been in Australia since 2017. All three MNOs in Australia offer eSIM support, and iPhones are now being manufactured with eSIMs – starting in 2018. With the eSIM, you’ll be able to switch plans or telcos provided the carrier supports eSIM technology and the phone is unlocked. If the phone is locked to a specific carrier, you can only use that provider’s eSIM plans.