What different types of Family Plans are available from the phone companies?

Family plans are big business. In the last 2 years, phone companies have started paying special attention to the different family phone plan needs there are out there, and designing products to suit.

Here are your main options for Family Plans. As you can see, Yomojo Mobile, OVO Mobile, and Optus are the main proponents of these plans.

How do family plans work?

The way each ‘Family Plan’ works differs according to the problem they’re designed to solve.

Do family plans save money?

The average Australian family now has more than 17 connected devices in it – things like laptops, tablets, phones and an ever-growing list of new things which are being connected to the internet.

All of  that means families are managing more SIMs than ever before,

Fundamentally, family plans help in the management of SIMs involved in all of these connected devices. With multiple SIMs, some family plans can save users money. They can help you manage the big pools of data in-between with shared family plans. They can provide your child with the basics of phone use – and help them learn how to budget.

How many users can I add on a family plan?

The maximum number of possible users on a family plan depends on the provider and plan type chosen.

Who are Yomojo and why are their plans so ‘Family friendly’ ?

Yomojo are a brand you might not be that familiar with. Recently, they have set their stall around facilitating family phone plans and they’re doing well by targeting this group of users.

Yomojo have a number of features built into their plans which lend themselves well to families:

Why are ‘$10 per month’ phone plans good for families?

In 2019, a number of phone companies now offer ‘pocket money’ phone plans with small data allowances – typically in the order of 1GB or 2GB of mobile 4G data.

Tying one of these plans together with a phone (especially if you pick a prepaid version) can be a great way to provide kids with a sure method of always being able to contact you (these plans usually include unlimited sms for the month).

What are the alternatives to a family plan?

Normal SIM Only and Prepaid plans are the alternative to specialized Family Plans — use separate SIMs on separate, individual plans.

There are prepaid plans for kids tailored to avoid huge bills. There are also cheap plans from smaller providers (a.k.a. MVNOs), that access the same networks as larger telcos

If your answer to any of these questions is yes, you might well be able to benefit from a phone plan especially designed for families.

Below, we’ve taken a look at what family plans are, how they work, their pros and cons, and we’ve examined the alternatives.

70% of individual Australians use 3 or more devices to access the internet. Estimates for the number of tablets, phones, and laptops held by a single family in Australia vary between 17 and 27. The continued increase in the number of ways to access the internet represents an opportunity for phone companies. Whichever of them can provide the data and data management tools required by ordinary people to live their connected digital lives will make the most money. It’s not hard, then, to see why Family Plans are the newest addition to the range of products being marketed.

There are 4 types of family plan available. We will summarize them here and then explain each in the text below.

Attention: The internal data of table “76” is corrupted!

1. Volume Discounts : Family plans are a new way to save money on multiple SIMs

As we’ve said, the number of connected devices is already surprisingly large ( around 20 ) and is also set to grow at prodigious rates in the years ahead. The so-called Internet Of Things will be fueled by 5G network services which allow for literally millions of parallel connections to a single cell tower.

Not all of these devices will be connected to the mobile internet using a SIM – many will use WiFi connections. Many of the products added to the cellular internet will require a SIM, however. And if you’re going to have multiple SIMs on your account, then why not get a discount for having all of those SIMs with a single provider? Yomojo now offer a stepped discount, rising to 15% off the total bill if you take 6 or more SIMs with them at one time.

If you’ve got one service working and you’re satisfied with the network coverage you’re getting, adding a new SIM to the family, on the same network is an extremely low-risk thing to do. Associating multiple SIMs to a single account has other advantages too – you only have to review and think about a single bill, for example.

Australian children are being given mobile phones at younger and younger ages every year. Usually provided initially under the auspices of ‘safety equipment’, modern smartphones are nothing less than a constantly available portal to the internet – and all the good and bad that the digital realm contains.

Realizing the threat, software providers have developed applications which can be installed by a parent on their child’s phone. Two examples of this software are shown below. Both give parents control over what their child does online, through their mobile phone connection. At the simple end, this sort of service allows the most obvious examples of places on the internet that children shouldn’t see to be blocked with a ‘blacklist’ of websites they can’t access. Other aspects of the service include the ability to schedule a time every night when the phone shuts itself off.

Data sharing plans are, for now, offered only by two of the major phone companies – Optus and Vodafone –  and even then, you can only get the data sharing facility on their postpaid range. Here are the mechanics of the family plans offered by both Vodafone and Optus. 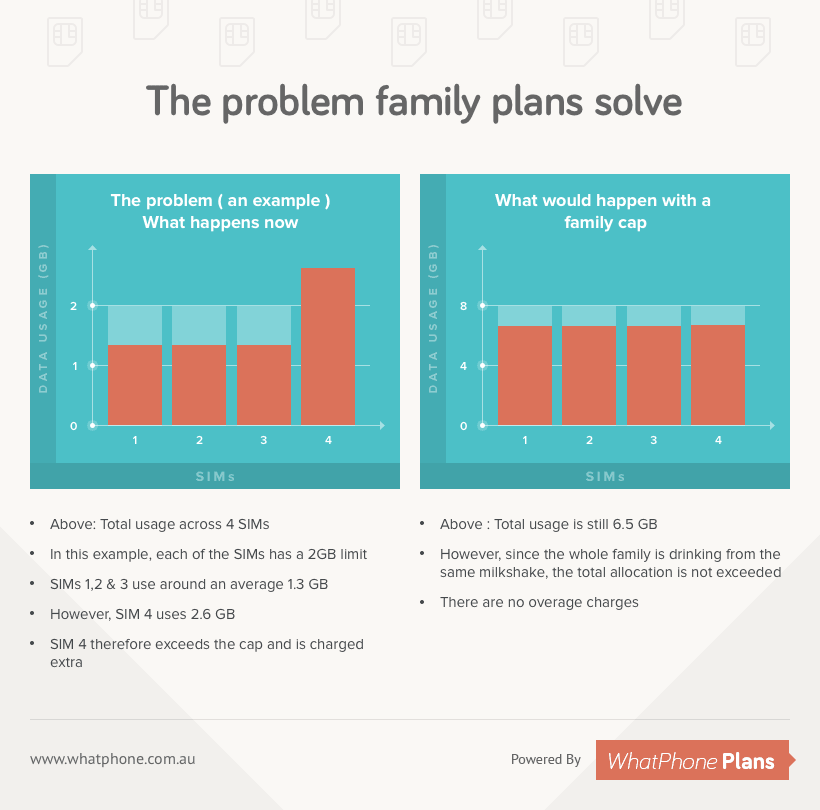 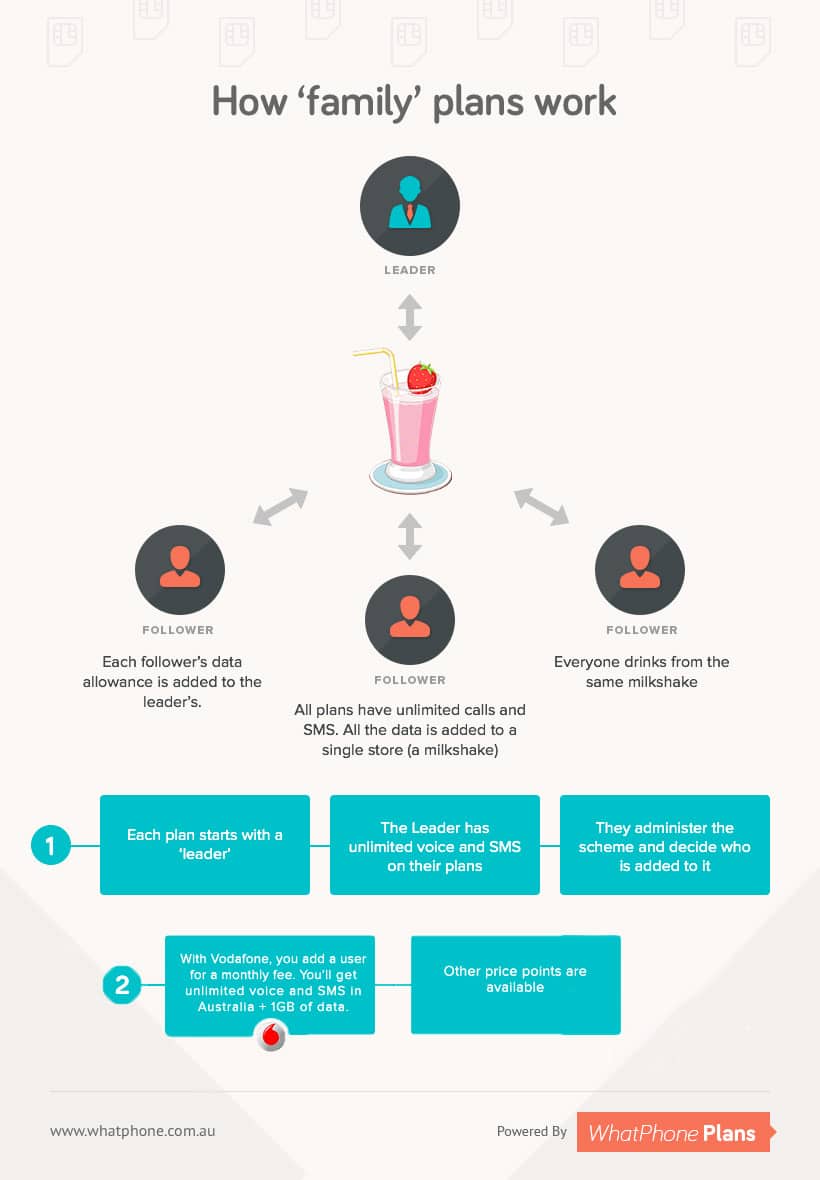 This shared data family plan scheme should not be considered on its own. The phone companies are motivated to help you use a lot more data. They’re encouraging high-quality video downloading through their Stan, Presto, and Netflix products or affiliations.

If people are not using their data allocations, they can be more efficient by using the app from the phone company’s website to determine their own usage and make the most of what they have. If they are exceeding their usage, it’s not that expensive these days. The major phone companies that still charge for data overages have automatic charging at $10 per GB for those that do go over.

The biggest problem with shared data is a lack of personal responsibility for the use. When the average cost is less than the personal marginal cost, you end up with problems like global warming. This is known as The tragedy of the Commons. In simple terms, if you add your teenager to a shared bundle and tell him you’ll pay the bill, you’ll be paying more for data pretty quick. 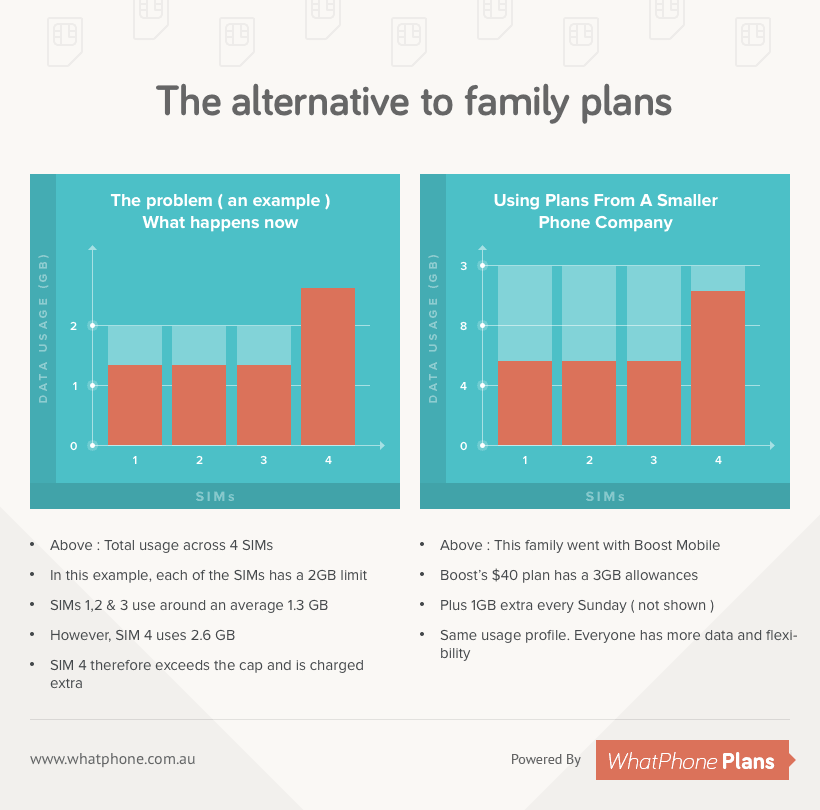 Summing up Family Plans - Are they useful?

Overall, Family Plans are extremely useful. The concept of having plans specifically designed for them is slightly overwhelming to some. Shared Data Family plans are another step towards the intelligent management of data. Kids’ plans are an affordable way to start a kid with a phone and plan. Child management software is well worth considering when you remember that you’re giving a 10-year-old an unfiltered connection to the internet. Each of these Family Plans addresses a unique and real need.

In fact, this is probably only the start. The first cab off the rank is offering a new ‘Product’ (Family Plans) to multiple people in a family. Further down the line, the principal can be assigned to multiple SIMs for an individual to cover things like the SIMs in their car, boat, umbrella, and laptop as everything gets added to the bill. In our view, a better way to manage data usage ( than grouping it into a family plan ) is to make yourself aware of your own by using the app from the phone company. If the real problem you have with data is usage, then a shared plan insulates you from the effects; it doesn’t solve it.

We advise that you also consider alternative plans from smaller phone companies. They give you data allowances which are so much bigger than Optus or Vodafone that there is no need to share data. They avoid the problem of encouraging usage by avoiding responsibility for it too ( because everyone pays their own bills ).