Telcos are forever trying to perfect their communications wherever they are around the world and Australia is no exception. Overall, the country’s broadband home based network is still in its early days of development, but its mobile networks are some of the best in the world. 4G is spreading throughout the country at breakneck speeds. At the same time, phone users will be glad to know there is not a lot of difference between the three chief telcos when it comes to 4G coverage. However the battle for subscribers does not solely rest on 4G coverage but compatibility of devices and speeds of downloads are in the forefront too.

Vodafone’s 4G comes out at 77.61% coverage, while Telstra, which used to be the main telco player, has 76.27% of its network covered. Of course you might expect Vodafone to be leading somewhat as it is only just about to start rolling out its home broadband after calculating that the time was right to do so. Both of Australia’s other two telcos have already been heavily committed to broadband via the NBN.

Despite these impressive statistics not everyone yet has the privilege to access 4G. Telstra was the 1st to roll it out and now has more than 3,800 sites that are 4G enabled throughout the major cities. Generally, many suburban areas are covered by Telstra and more than 600 towns scattered throughout the country. Telstra hasn’t stopped in its move to spread 4G as it hopes by the middle of next year to increase its coverage to 9,000 sites.

Vodafone took a bit of time in the 4G race but now it matches just about the same level of coverage as Telstra. 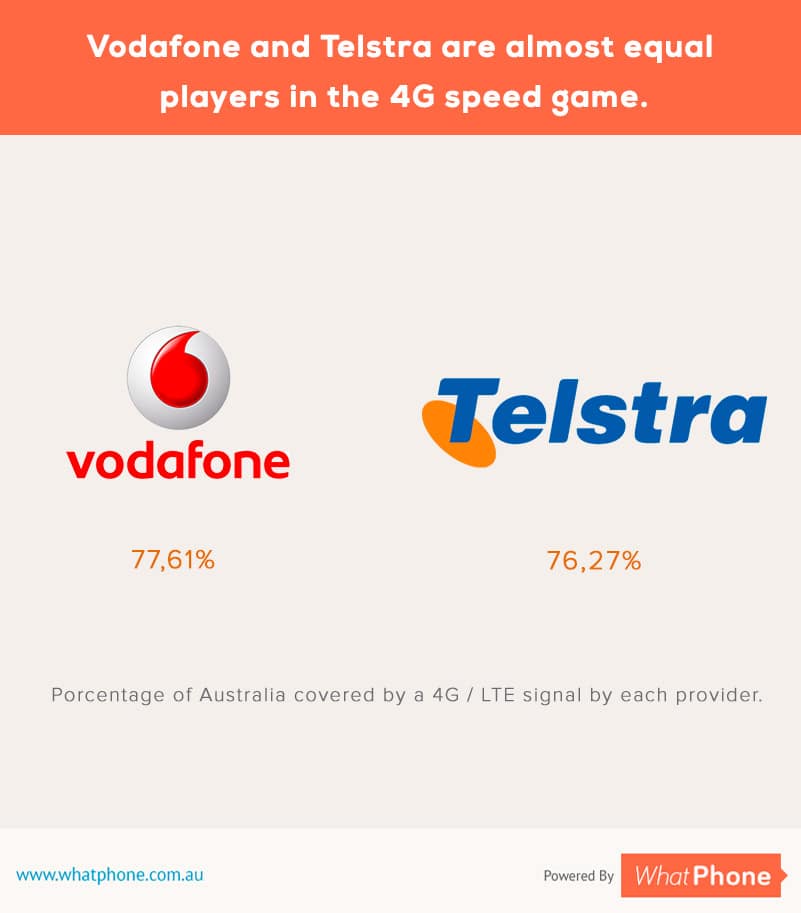 What are Frequency Bands and How do They Affect 4G?

When it comes to the customer, frequency bands matter as much as does fast 4G coverage. Each telco is linked to a specific frequency, which means the phone you own must be able to operate on that frequency. Take Telstra as an example. Telstra claims it has the fastest speeds for 4G, using what it calls its CAT6 4GX branded LTE-A network. This quite simply means it’s combining two frequencies 700MHz and 1800MHz. This is known as carrier aggregation and it is reputed to enable the deliverer of much faster speeds.

There has been a suggestion that Telstra’s 4G can manage download speeds of 1,000Mbps. However to be able to cash in on this super fast speed you must have a phone that is compatible to 700MHz/1800MHz and one that can be paired with CAT6. If you are moving to Australia or are staying for any length of time that would necessitate you having good phone coverage for phone and data you will have to check to see if your phone supports 700MHz.

If you have an up-to-date smartphone you may have the CAT6 hardware installed and carrier aggregation as well. Otherwise the answer to getting the best 4G connection is to buy another phone that suits your chosen provider. This is of course a given for anyone who is keen to keep up-to-date in terms of speed and technology, so a new smartphone wouldn’t go amiss anyway, whether you are an Australian or a short or long term visitor.

So, What About Vodafone?

Vodafone has had its ups and downs over the years, especially in 2010 when its network became so overloaded that its whole communication system broke down. The black-out was so bad that subscribers could not use the system at all, for a short time anyway. Vodafone didn’t give up the ghost though as a result of this disastrous outcome and has grown from strength to strength over the last 5 or more years. In many places it is at least as good as Telstra for 4G, even though the rural areas receive most of their 4G coverage from Telstra.

Vodafone is about to re-farm its 850MHz frequency used for 3G and turn it over for 4G use in metropolitan areas. 850MHz is used more often as a standard frequency than the frequency used by Telstra which is 700MHz.

Your Smartphone will Affect 4G Performance – not the Coverage

As has just been mentioned not all smartphones are necessarily compatible with the 4G network but one of the recommended devices is the iPhone 6S. Apple had its wrists slapped after it introduced the iPad 3 and said it would work on 4G but users found it would not work on LTE frequencies which are used around Canberra. Apple soon introduced its iPhone 5 and ensured it worked on the 1800MHz spectrum, which is the common frequency used by Telstra and Vodafone.

In a nutshell, which ever telco you have signed up to the performance of 4G throughout the country will be similar. You shouldn’t blame your telco if your smartphone doesn’t work but check to see if it is compatible with the frequency used by your chosen provider.