When the SIM arrives, how do I activate my new Vaya service?

It’s extremely simple to activate your SIM when it arrives from Vaya. It’s also almost exactly the same process with whichever phone company you pick, and you’re best to do it online. Once you receive your SIM pack, go to Vaya’s website and simply click on “Activate” in the top right of the screen and follow the steps.

How long does it take to port my phone number from the phone company I’m with now, to Vaya?

Again, this is almost the same answer with whichever phone company you are moving to.

All the phone companies have access to a centralised porting database. They share it. When porting from another provider to Vaya, it may take as long as 3 business days to transfer the number. Most numbers are ported in far less time.

Vaya may need to get a hold of you to request further information if the port is rejected by your current mobile provider.

Typically, when I move, I expect less than 24 hours if I’m doing it on a working day. Although, as you would expect, no one can promise you that. The 3 business days is kind of a ‘worst case’ scenario.

How can I check my voice and data usage as I work through the month?

Can I keep my current number if I move to Vaya?

Yes. Vaya can port (keep) your existing number from your current provider. You don’t have to do anything, either; just order the SIM and tell them you want to bring your number with you as part of the online purchase process. Vaya will take care of the porting bit for you. Once your service with Vaya is activated, you are automatically terminated from your previous provider.

Can I tether using Vaya?

Yes. All plans can use tethering, granted you have a compatible handset. If you’re tethering, you might like to consider extra data for your plan. Laptops and tablets use a lot of data.

We also have a related article which compares international rates from key Vaya competitors.

Can I get a handset with my plan?

Not from Vaya. Vaya only offer SIM Only plans. There are an increasing range of places to get a handset and we’re sure you know what they are. The major phone companies, eBay, family member hand-me-down, or overseas from Kogan, for example.

How will my data usage be billed?

Your data usage is calculated in kilobyte (KB) packets on all of Vaya’s Plans.  Check the data rates for the plan you want by going to the Vaya website.

How can I pay my bill?

All of Vaya’s plans are direct debit mandatory. They can arrange your monthly payment to be paid through your bank of choice or a credit card, if you prefer, automatically. If you want to pay your bill in person, you can do that as well through Australia Post for a $2.75 fee. Paper billings incur an additional $2.50.

Vaya also offer payment options through Bpay for a $1 fee. Paying over the phone with your credit card or is free. There’s a $15 late payment fee in all instances.

Am I able to change my plan once I’ve connected?

You can change up or down plans in any month.

Can I manage my service features on my own online?

Yes. You are able to enable and disable voicemail, outgoing calls, roaming, SMS and, importantly, you can keep an eye on your usage.

However, while these can be performed online, there’s no self-service app.

Vaya Mobile Review – Updated – Should you go with them ?

Vaya are an MVNO  – or smaller phone company – which has been around for a while now. Their focus is on value-based plans and lower spend levels. They have options as low as $16 in their range.

They’ve had some questionable policies in the past – especially when it comes to charging customers unexpected fees. That’s given them a bad reputation online as far as reviews are concerned. However, Vaya were acquired by Amaysim in January of 2016, and under their guidance, their customer service and support have improved a great deal. Since this may be the key issue on your mind – the question to resolve before you sign up to Vaya – let’s start with how the way they treat their customers has improved since Amaysim took over.

The key point, Complaints about Vaya have reduced enormously

The TIO is the Telecommunications Industry Ombudsman. It’s the bottom line for complaints about phone companies. Things have to be pretty bad before a customer takes it to the regulator. A few years ago, Vaya had one of the highest complaint rates in the industry. After the major phone companies – Optus, Telstra, and Vodafone – Vaya, with its much lower customer numbers, had the highest number of complaints.

The problems people were facing related mostly to unusual charges – for data that they used outside their plan and funny SIM fees. Our review at the time called those out. 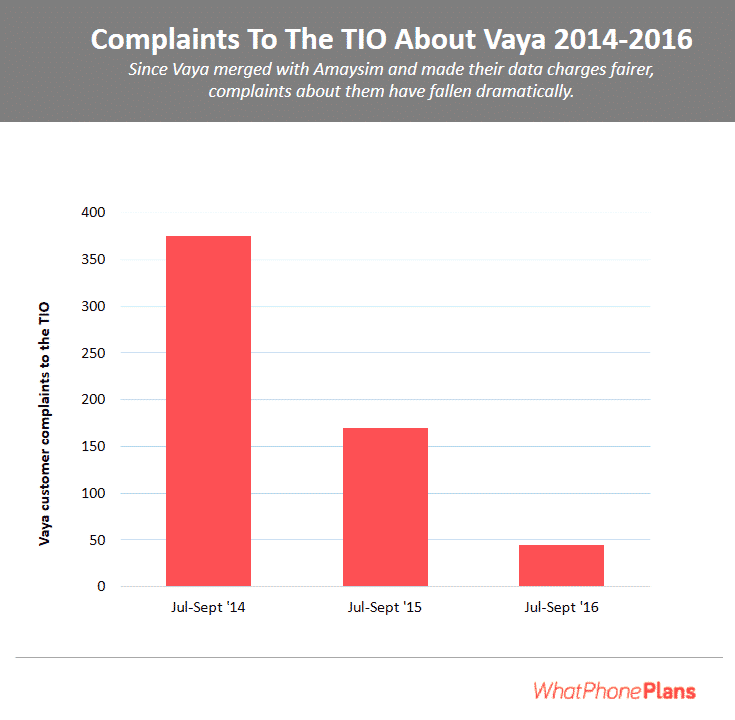 Complaints to the TIO – The Telecommunications Industry Ombudsman – have decreased enormously since Amaysim took Vaya over. Older, bad reviews you’ll find online about customer service are no longer wholly relevant.

As you can see, since Amaysim took Vaya over a couple of years ago, they’ve fixed many of the issues which caused the problems. The major improvement is a charge of $10 per 1 GB of data in addition to the data already included in Vaya’s plans. It’s the way the industry deals with forecasted data needs  Things are liable to keep getting better. We’ve included (below) a table which shows complaint measures from the same source (the TIO) relating to Amaysim, who now own and run Vaya. 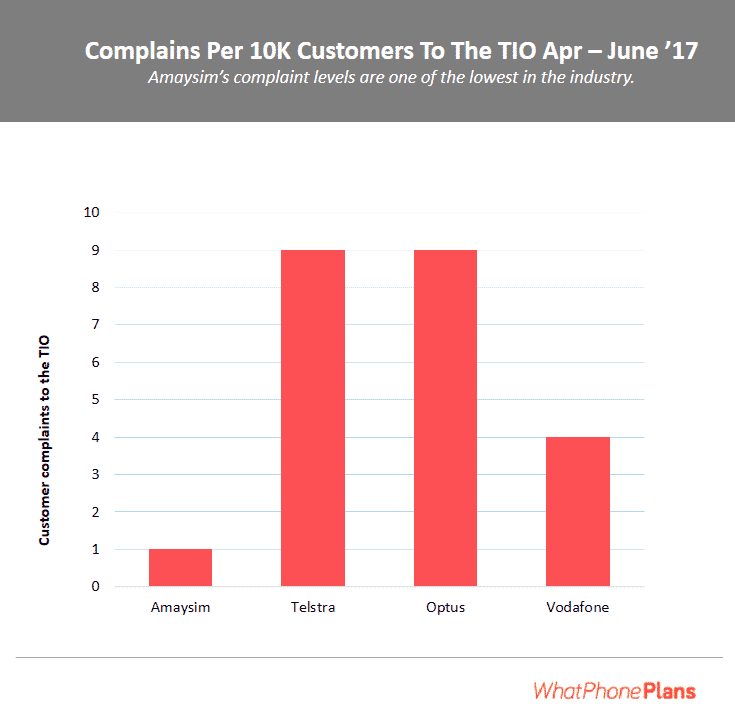 In short, when you read online reviews of Vaya, bear this in mind: The complaints they received in the past do not reflect their current performance.

Reviewing Vaya on other components of their plans and service

Vaya used to be the company we recommended most frequently for phone plan buyers. However, unfortunately, Vaya stumbled and then fell. As we’ve covered, they suffered a lot of complaints and we had to stop saying they were a good bet.

Amaysim took them over at the start of 2016. In the months that followed, Vaya (a Brisbane based telco) added an Unlimited range, no doubt informed by insights from the Amaysim side of the office. As well as their $10 / 1GB charging, Vaya have also moved from MB to per Kb charging – another fairer improvement. Finally, they no longer charge for basic SIM delivery – although you can pay more to get it delivered quickly, which is actually a nice feature others should emulate.

Now, with Amaysim’s help, Vaya are a postpaid SIM only provider with a reputation for value. Let’s take a look at the details of their plans.

What we love about Vaya’s Plans

They have Some of the best data pricing around : 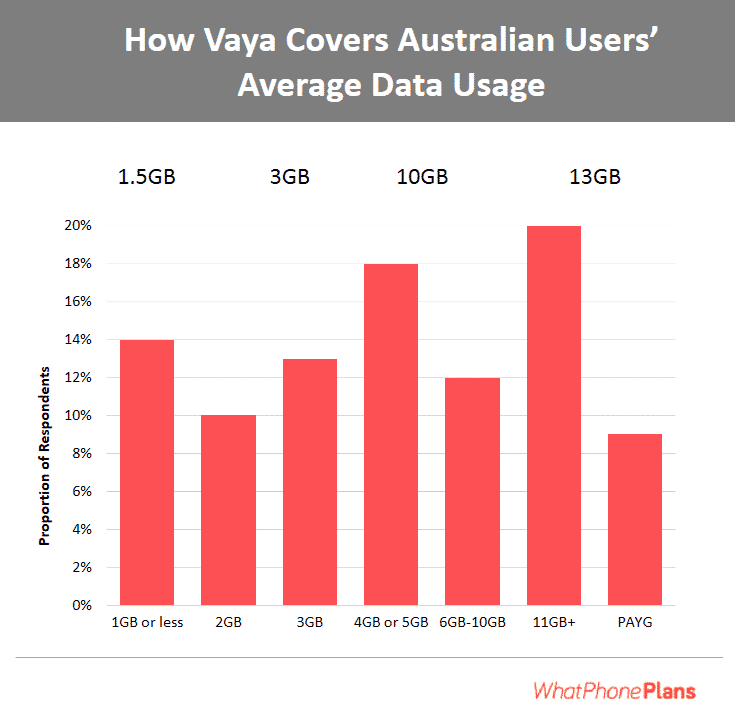 Our Vaya review shows that, whatever your data requirement, Vaya’s price match guarantee means you’ll get it cheapest for them. Remember to consider their contract options, too. ( See below.) 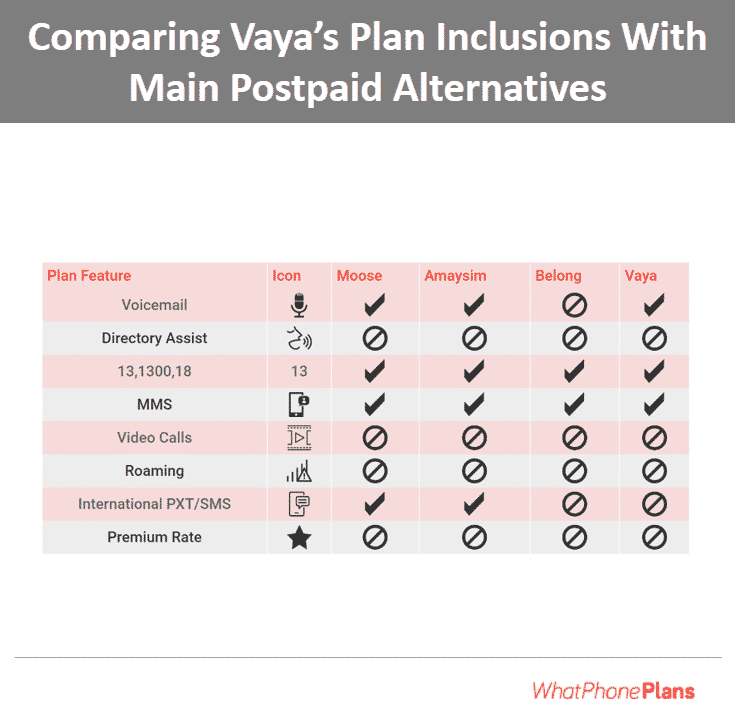 Vaya’s postpaid plan range does not include International SMS and MMS. Other postpaid options do.

Notes on the above chart :
Belong Mobile offer a $5 national bolt-on for voice services. Plan details shown include that addition to make this a fair comparison.

Which rivals / competitors to Vaya should you consider

Looking at it, there is an almost overwhelming range of Optus MVNOs / network resellers. At a high level, we usually focus on ( what are, in our view, the best ) 4 and segment them like this.

Vaya, like many phone companies, now offer substantial data bundles for use as mobile broadband services. (link to mobile data survey.) With the problems associated with the NBN (long waits for install, slow speeds), Vaya provide a burgeoning alternative to a fixed connection.

Vaya’s data only plans start with smaller bundles designed to be used in tablets, and rise to bundles more than 70GB of data which have a host of uses from keeping the kids entertained in the car to acting as an alternative to a fixed NBN connection.

They’ve been around for some time and the market has changed since they were established. It’s of little relevance to today’s shopper, but Vaya had 4G data services long before their rivals. Vaya was reselling Optus’ 4G network before Amaysim, the company which is now their big brother ( and, apparently, trusted adviser ).

To a degree, this level of range among Optus resellers is useful. As Optus move to more value adds like the English Premier League EPL in its plans, having MVNOs which provide the basics of what people really want from their phone companies – voice, SMS, and data – becomes more important. Most importantly for you, Vaya can now be trusted not to overcharge you. Amaysim have steered them in the right direction. Vaya are now offering fairer plans and that’s’ definitely something people want. 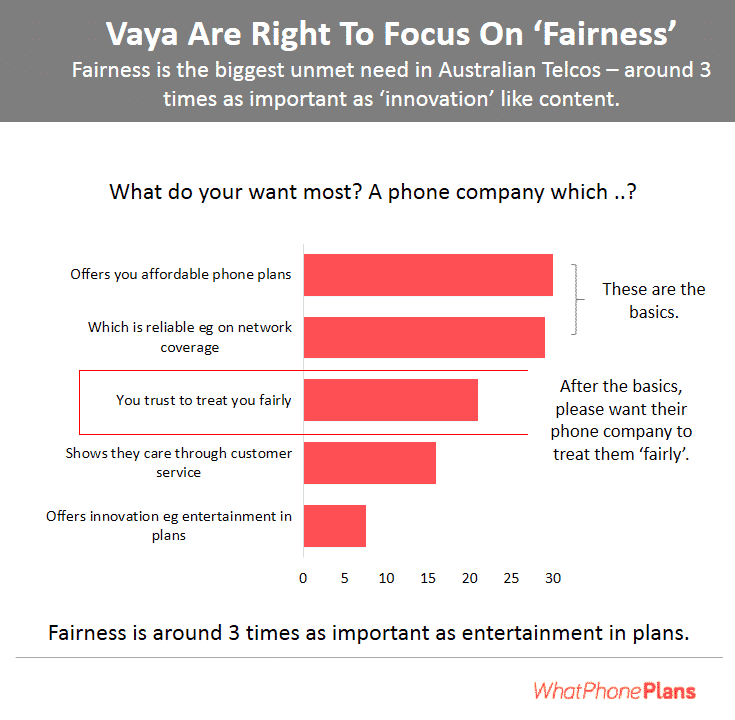 Our survey shows that the way Vaya have improved their plans is just right. People want and expect their data pricing to be fair.

Postpaid plans are not right for everyone – but they’re all Vaya sells. With such a range of options just on the Optus network ( of both prepaid and postpaid ) and quality alternatives like Boost, Lebara, and CMobile on other networks, Vaya have their work cut out for them. Add in such a troubled brand and the strength, recognition, and recall in the Amaysim brand and the question might be: Why keep the Vaya brand at all ?

With all that said, Vaya’s plans are the cheapest. And if anyone can turn the Vaya brand around, Amaysim can. You can already see the benefits of Amaysims involvement in what Vaya sell. The unusual fees and service aspects that typical customers experienced as a ‘rip off’ have been largely removed ( although some weird ones still exist ). We will keep an eye on the customer service aspects of this company and keep the article updated. We hope we see an improvement.

Vaya offers some of the best value in the Australian market. The company suffers from a reputation for poor historic service levels although they’ve improved them a great deal. We provide the latest customer service satisfaction statistics so you can make your decision on the best information available.